I do this as a hobby and art: not a career (for now?). Just saying.

If you were reading along, last time I posted a screen shot from boardgamizer    which, every time that you load the page, you are greeted (taunted) with a game concept. When I loaded the page last time I got a simultaneous player action game mechanic with a legacy environmental theme involving player elimination victory with fewer than 30 some cards. I’ll speak on the game I attempted on this after I post a screen shot of the webpage which will be the next challenge I attempt.

A game with memory variable player powers involving secret codes in new york where in which the most amount of resources wins with a constraint of no cubes. I always read that as no meeples either: essentially no markers.

I just read this to my wife and she immediately thought different kinds of gangsters (Jimmy the Squid, Tommy Gunhands, etc…) where you have to get money (of course). Not sure on the player actions, but you can force other players to help you if you can remember their secret hand shake (that last bit was my idea!). My wife is awesome? BUT I’m getting ahead of myself. Not on the wife being awesome thing I mean… 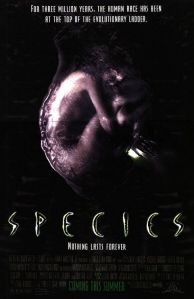 OMG that super hawt movie from the 90s all boys who loved sci-fi and women loved as teenagers?!? … no sorry. Though now that I’ve posted that picture… maybe I should go back to the drawing board… Also, note: This name (species) has already been taken for a board game… moving along:

The time I clicked on boardgamizer and got the inspiration for this , I was considering a game where everyone was going to be some kind of microorganism blob thing, we would have 12 or so cards in our hand that would either be actions, permanent bonuses/ actions, environmental effects and our blob would grow or get weaker until it was consumed by other players. At this point, because I hate player elimination and thought it would tie to the legacy theme, I was trying to think of a way where in which the absorbed players could now either HELP or hinder the person they were absorbed by.

Another person in my life, whose lady will be having a baby soon, there by possibly decreasing how much he can antagonize (read: improve) my design ideas. I’d mentioned the above in more vague less “one-paragraph” sort of manner with him, he took the idea and, like he does with all of them, chopped it up into pieces and made something else. Curiously, instead of making something simpler, he actually made something more complicated, which I then refined.

Components:
4 decks of specialization card types (‘steal’ ‘grow’ ‘destroy’ ‘cognitive’) each having 3 phases (I, II, III), with each phase having four – eight unique (?) cards. These are ‘powers’ of the species.
6 cards labeled A-C and also 1-5. Or use dice… something to indicate a letter and number chosen in secret and then revealed.
Colored cubes representing your genes.
Tokens (or dice?… SOMEthing) to track population.

Cards: All backs of cards indicate what specialization they come from. The backs also indicate what phase they are for (I, II, III).

On the text side, there will be spaces for genes (cubes) to be placed. The number of cubes needed is referred to as ‘complexity’. A title. A keyword. A phase reminder again. Game text, which either does its thing every turn, every turn when filled with genes, when it is filled with genes only once or only once when revealed. 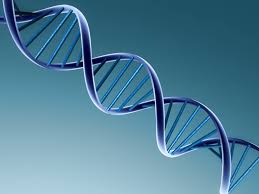 Start: Take one more card than there are players from each of the phase I cards (which consists of 6 different cards). So in a three player game, you will take 4 cards from each of the four specializations. Start making species (one more than there are players) by placing three cards next to each other, skipping a card if it is a repeat specialization: then another three (skipping as usual); then another three … until you have the correct amount of species.

Place a die or tokens or whatever is being used to track population near each species. Make sure it indicates five initially.

Turns:
*Resolve any revealed power cards from the previous turn.
*Players choose which species and which specialization of that species they wish to spread their genes into. Reveal, and then place cubes onto that species. [3 cubes in a two player game, 2 in a three to five player]
*All species with a population of 2 or more gains 1 population.
*Draw new powers from the next phase of a power that is full of genes.
*Resolve all species active powers (starting with species with the least population or species one if it is the first turn OR the species that is to the right of the species that was first last turn). Resolve one of its specializations phase I powers and go right, and then its next specialization, right, and then so on, going up to Phase II and then Phase III. If a species doesn’t have a power to resolve in a phase or specialization skip to the next species.

Powers: There are two types of powers. One kind stays on the species, the other is an environmental consequence which will, unless otherwise indicated, be returned to box.

“Acidic growth: Halve (rounding up) all species’ populations with ‘grow’ or ‘cognitive’ as their specialization with the fewest genes.”

“Dust production: All species lose four population (to a minimum of two) unless they have grow at phase II or higher. Leave this card in play. It is cloudy.”

“Malfunctioning mutation: Leave this power on this species’ specialization. Players cannot chose it to place genes on it.”

Here is a list of ideas for permanent powers.

This is an example of the powers for the ‘Grow’ specialization. The ‘steal’ will deal with parasites or eating plants or animals for energy, the ‘destroy’ does not grow the population at first, but decreases other populations, and the ‘cognitive’ does a hodgepodge of things.

Some later phases will be stronger (gain a population for each gene placed on the species to its left), do odd things (remove a gene from a random or specific species), or advance itself faster (add a gene from the player with the least genes in play) or differently (replace the highest phase power in the specialization to the right on this species with one drawn from the same or higher phase deck).

End: After a time a species may run out of population. It no longer activates its powers while that is the case. The game ends when either 1.) only two species are active 2.) a species can no longer advance in any specialization 3.) a card says the game ends.

This game is completely untested, I mostly have all of the powers created but not balanced. Heck, it may not even work as I intended (not sure why…).

It has simultaneous action selection, but I hate player elimination. The environmental aspect and legacy made me think of evolving species. And, yes, it does have more than 30 some cards, but not 30+ cards all at once (in most games) if you exclude the player action choice cards (A3, etc…).

This game came along quicker once I’d seen a friend’s interpretation of my verbal design. Just goes to show that it is always good to design with others’ feedback!

So if you have any feedback, the comment button is below.

This entry was posted in Uncategorized. Bookmark the permalink.

2 Responses to My friends are good designers; GDC #3 Species

The Gates Are Open

Bring your thinking caps and army of thoughts!

In Pursuit of Gastronomy, Aristology, and Hedonism

A blog about games. I don't blog often since I don't have interesting ideas often.

Game together, stay together.

A Board Game Design Diary

A Board game designer wannabe

An experiment in game design and teaching

Concepts on Gamification and Education

The latest news on WordPress.com and the WordPress community.